Hand-dyed cotton prints from The Gambia

The simple graphic depictions of African imagery have a wonderful naif feel. They are all created by our friend Musa Jaiteh in his family compound in Sukuta. Musa uses stitching, tying and wax stamping to create a resist before hand-dyeing with kola nut and indigo. All fabrics are 100% cotton, either damask or a light plain weave, as indicated.

Note about colour: Because Musa's fabrics are all hand-dyed, there may be slight variations between batches and patterns. See also: Washing African Fabrics

Ordering lengths: Musa dyes in small batches of about 4.5 metres long. Therefore, the longest single uncut length we can offer is 4.5 metres. If you order more than 4.5 metres, your fabric will come in more than a single piece. If in doubt, please contact us.

About Musa's kola and indigo fabrics

We've been working with Musa Jaiteh in the village of Sukuta in The Gambia since 2001.

As far as we know, Musa is the only dyer left who still dyes fabrics using the traditional, natural dyes of the Senegambia region: kola nut and indigo.

Musa learned his craft from his father, who comes from the Fouta Djallon highlands of neighbouring Guinea, which is famous for its indigo cloth. In 2016, Musa travelled with us to Guinea to help us research local indigo techniques and buy indigo textiles.

Kola nuts are culturally important all over West Africa. Fresh kola nut is chewed as a social activity. It shows great respect to give a handful of kola nut when you are received as a visitor. Old kola nuts that are too dry to chew are pounded with a mortar and pestal into a grainy paste, then mixed with water to create a dye stuff.

When he can get it, Musa prepares his indigo vat using the leaves of local indigo plants like the few he has growing near his compound. When indigo leaves are scarce, he augments his indigo vat with synthetic indigo from the local market.

Now here's a little known fact. Synthetic - or manmade - indigo is chemically and molecularly identical to the natural indigo obtained from indigo leaves. They do their job of dyeing fabric in exactly the same way and you can't tell the difference between them.

Many of Musa's designs are based on a simple process: wax + dye = batik.

Musa melts wax in a pot over a charcoal fire and uses hand-carved wooden stamps to apply the wax to his cloth: this is a lot harder than it looks!

If he's mixing kola nut and indigo, he stamps in an alternating checkerboard pattern, then dyes with kola nut. After drying, he stamps a second time - this time in the blank spaces of the checkerboard - then overdyes with indigo.

If he's dyeing only with indigo, he only stamps once before dyeing. However, to achieve a deep depth of indigo, he'll perform numerous dips into the indigo vat - even as many as eight or ten times!

For many of his most complicated and appealing designs, Musa uses various tie and dye techniques to create a resist before dying, either in indigo alone or with kola nut as well.

To create his striped designs, he carefully pleats and ties up to 5 metres of fabric lengthwise before dyineg. He also ties the fabrics in numerous ways to create starburst and sunburst motifs, as well as stunning marbling effects.

Musa works and lives in his family compound in Sukuta, a village next to bussling Serrakunda, The Gambia's biggest town.

Life in the compound is never dull - or quiet!

Musa, his brother Osman and his extended family are always busy preparing or dyeing fabrics. As soon as school is out, the compound fills up with children playing tag, chasing footballs or picking up scraps of fabric and dyeing them in an old tin of discarded kola nut or indigo.

Musa's fabrics are all 100% cotton. Some are on plain weave cotton, others on a subtle damask weave. In Africa, these fabrics are used mainly for clothing and tailoring. Many of our customers use them for patchwork and quilting.

With freshly dyed indigo, you can expect a ruboff of excess indigo, leaving you with blue hands. However, because of its unique chemical characteristics, indigo will not bleed into other fabrics. Over time, indigo will fade - just like your favourite pair of bellbottom blue jeans.

Fabric dyed with kola nut takes on varying shades of burnt orange. However, kola nut is not a very robust dye and will fade with excess washing and exposure to the sun. It is also a dusty dye, so you should clean your sewing machine after stitching. 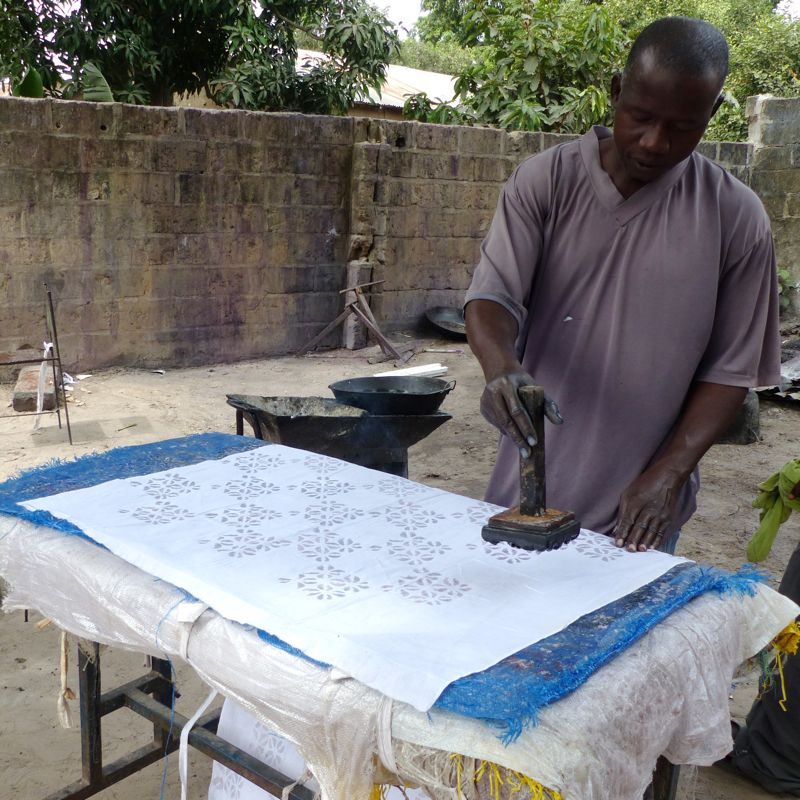 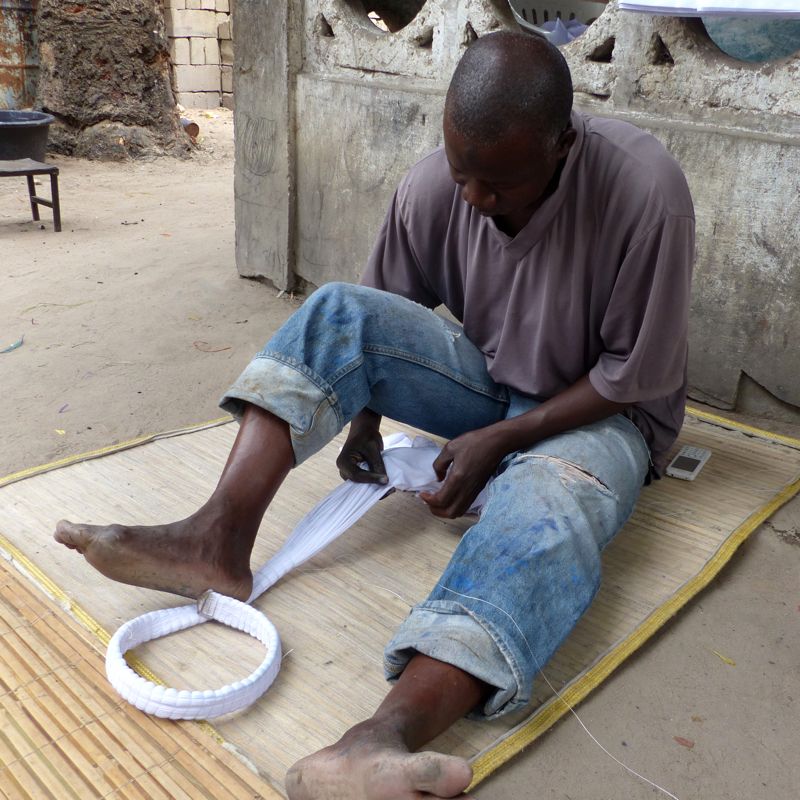 Musa tieing a resist pattern into a 'rope' of fabric. 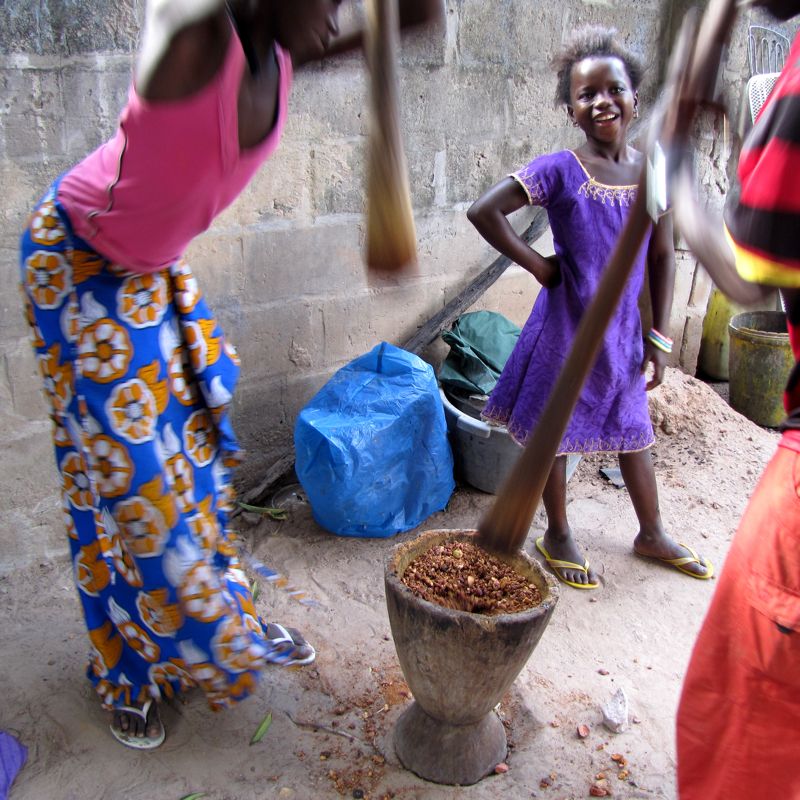 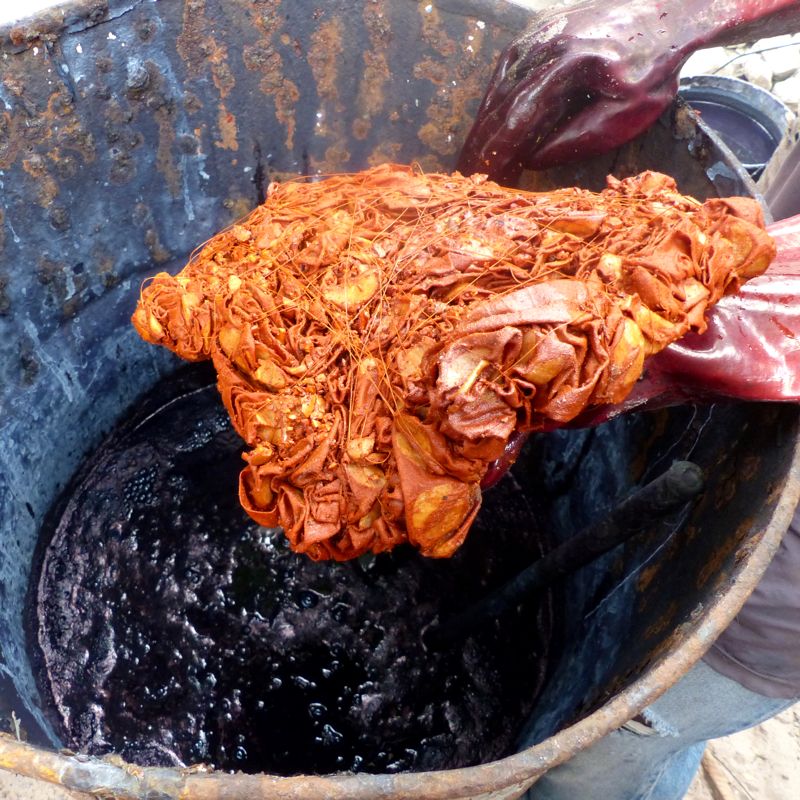 After first dyeing with kola nut, Musa dips his fabric into the indigo vat. 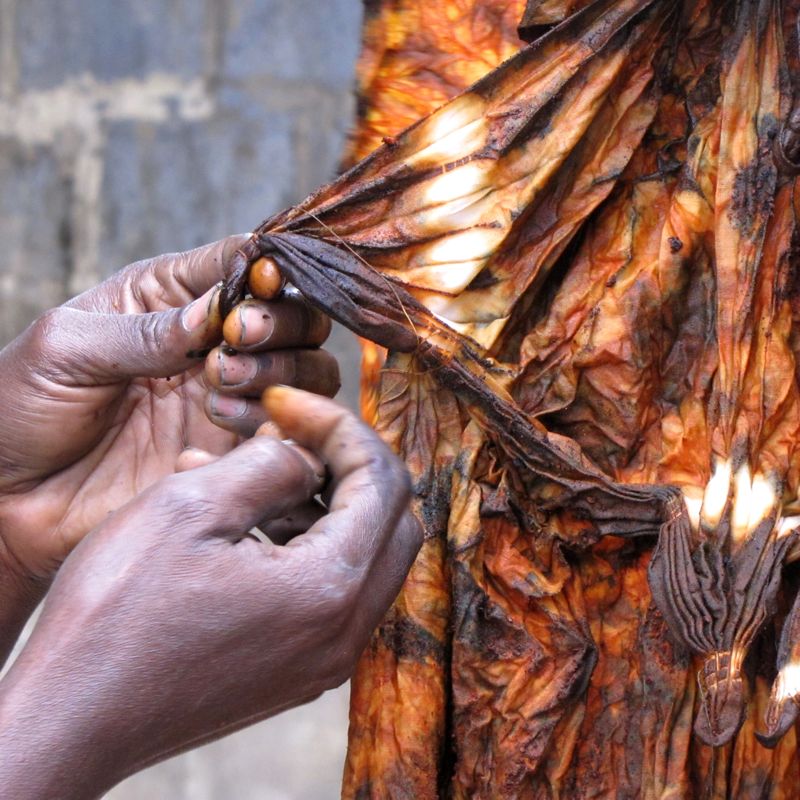 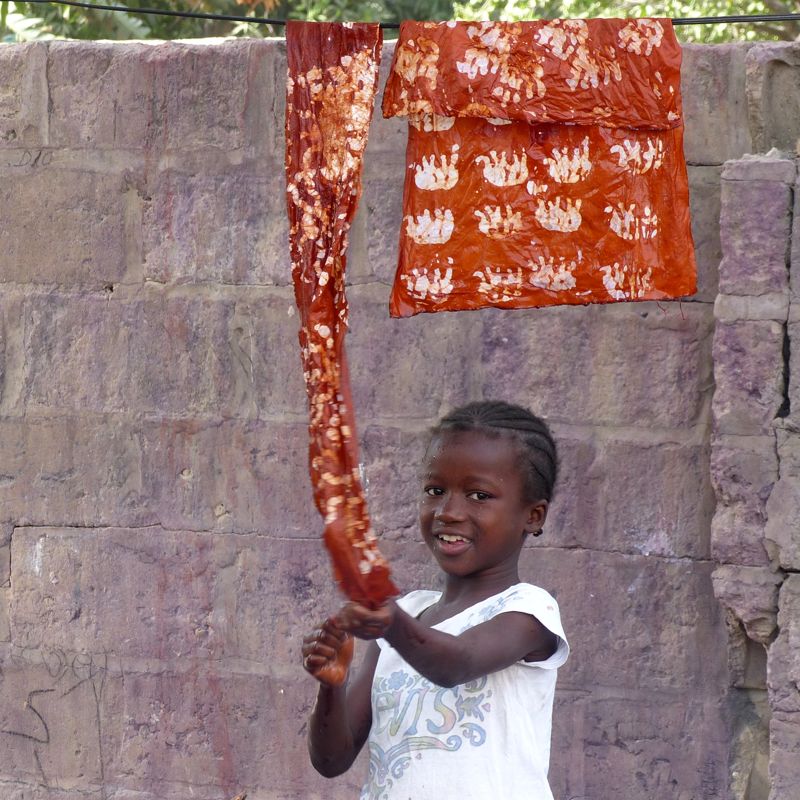 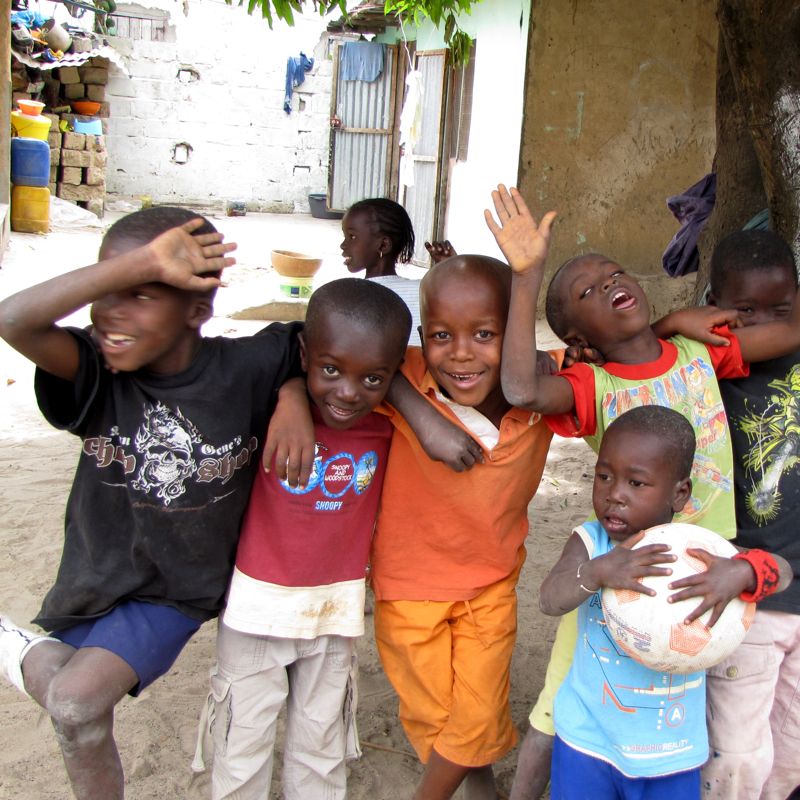 After school in Musa's compound. 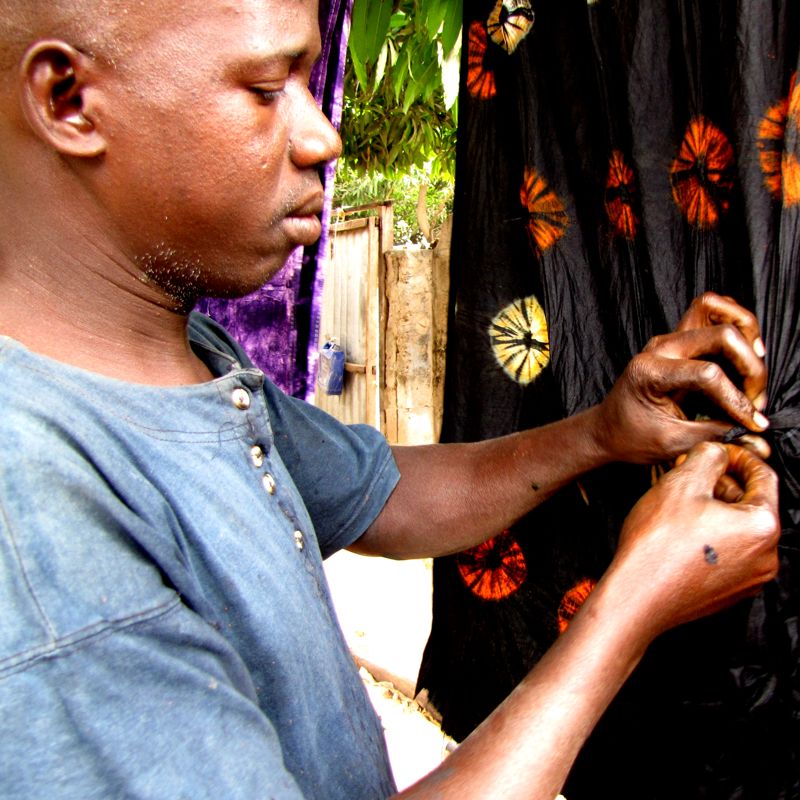 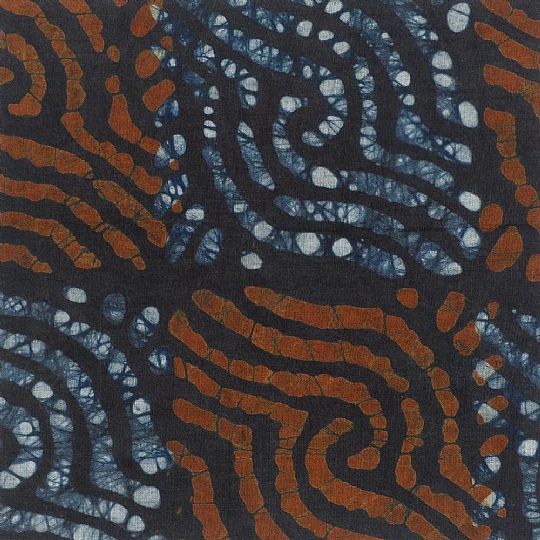 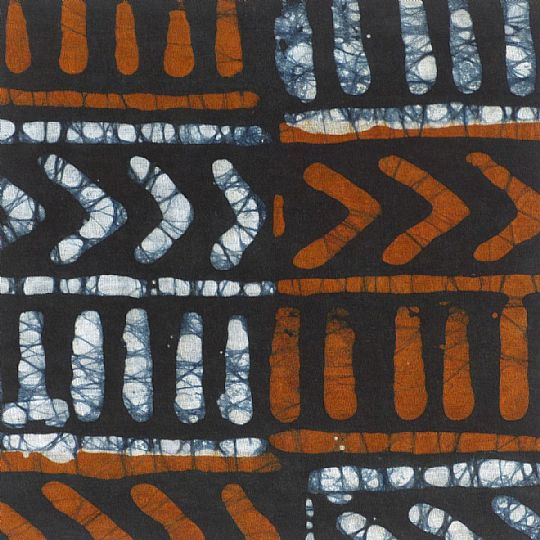 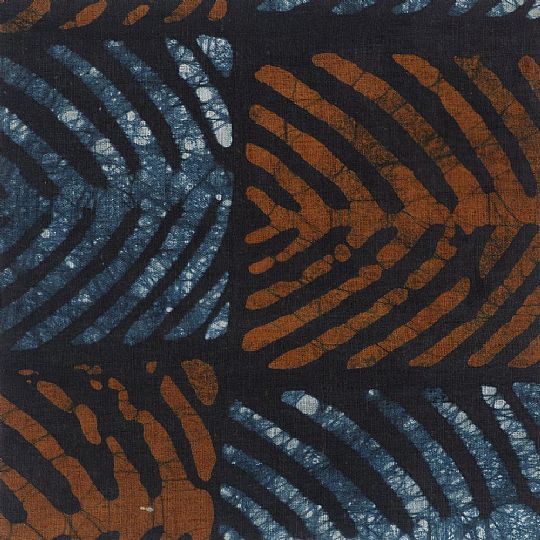 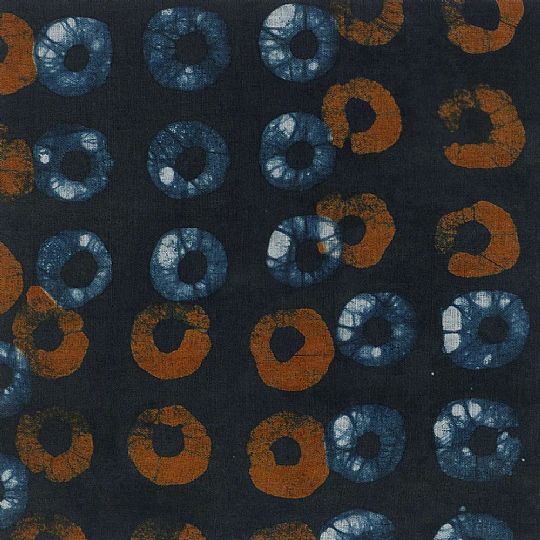 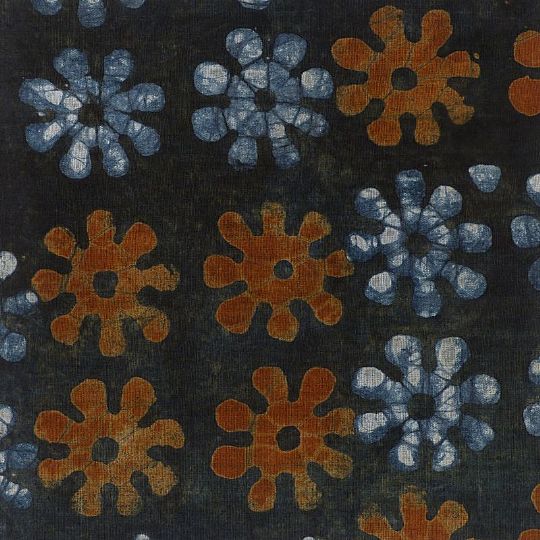 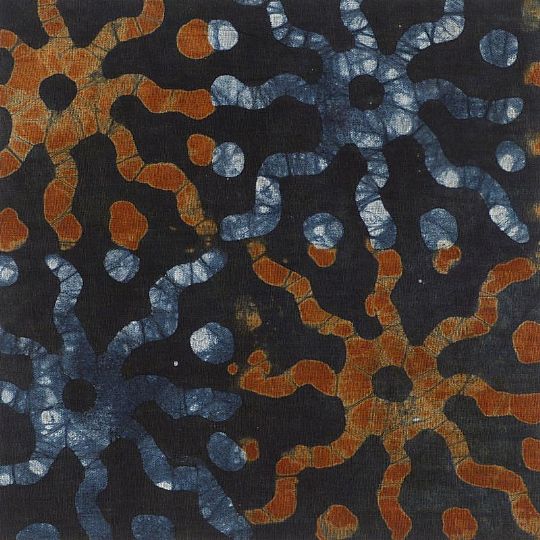 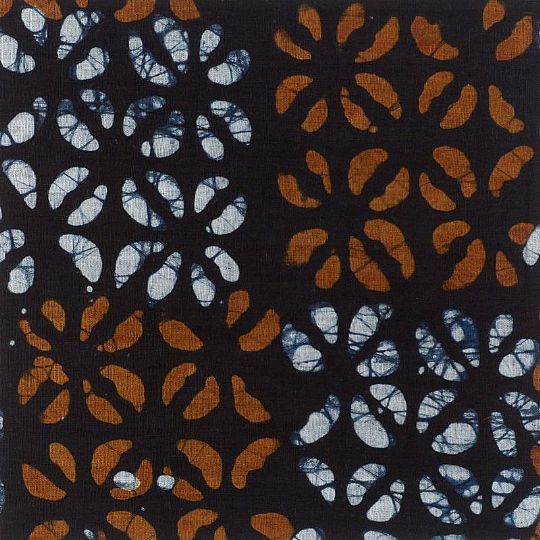 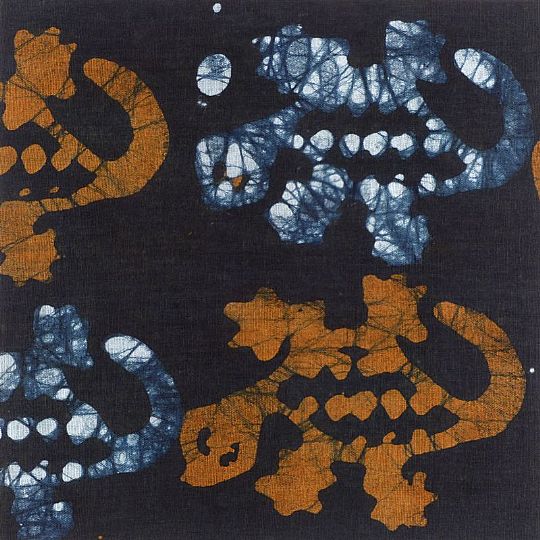 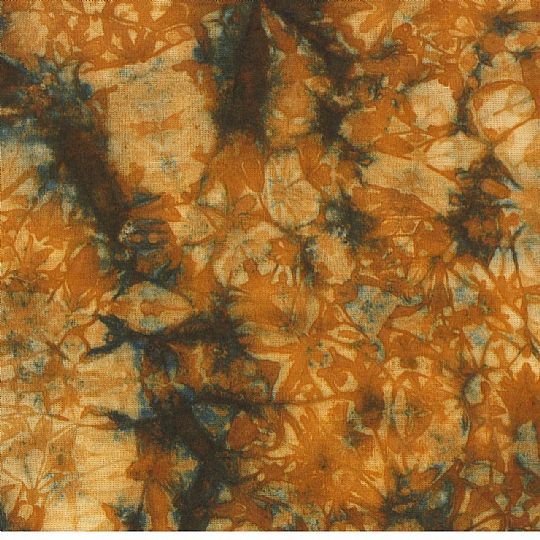 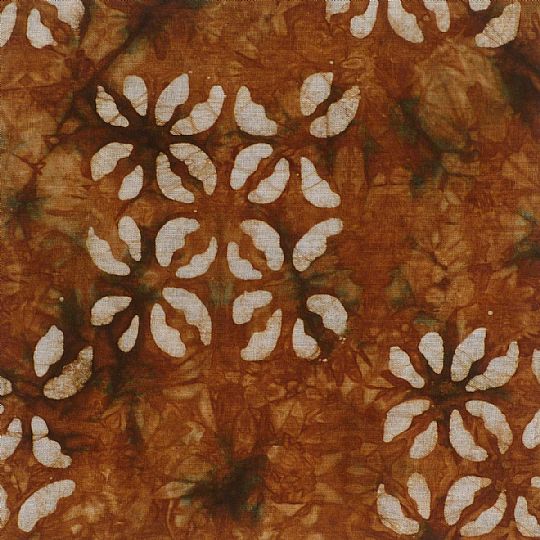 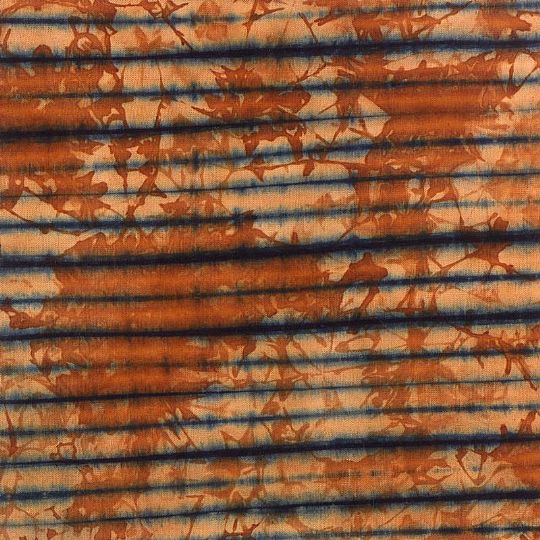 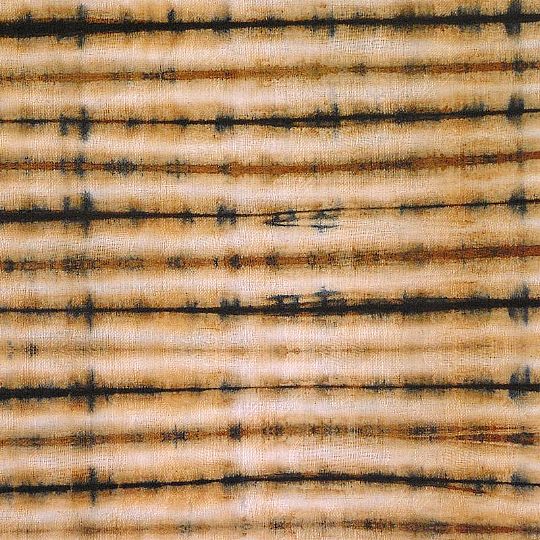 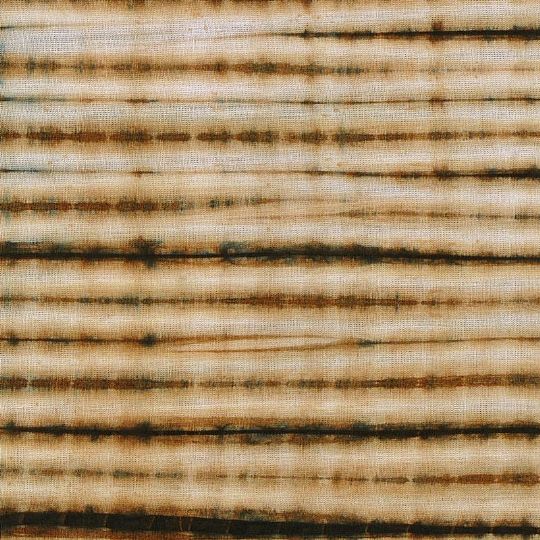 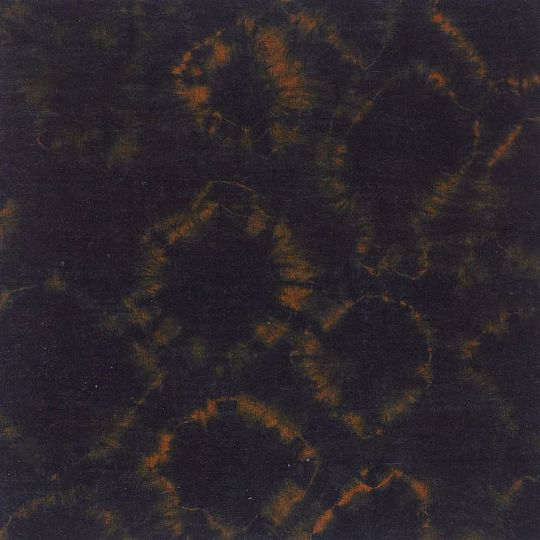 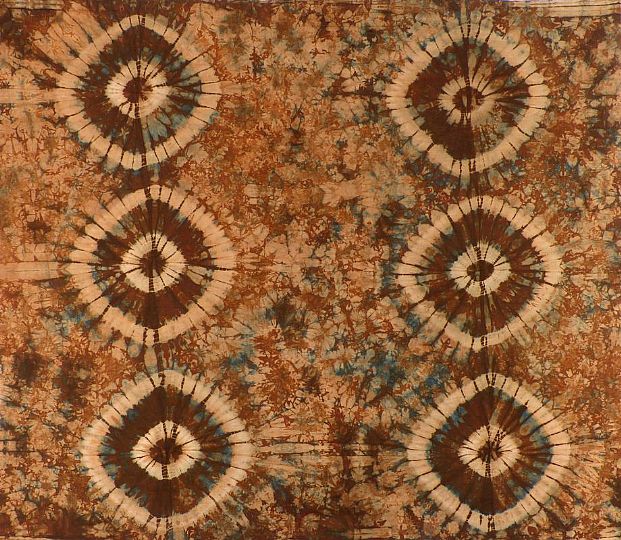 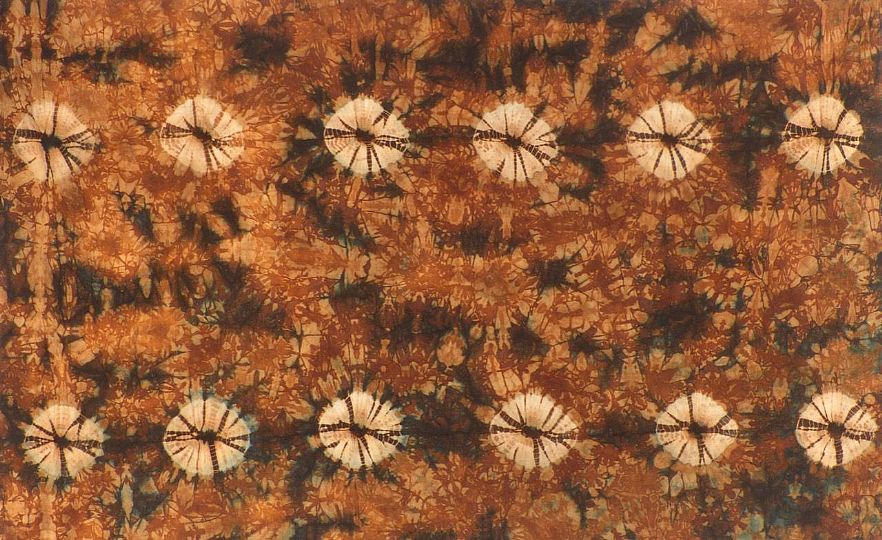 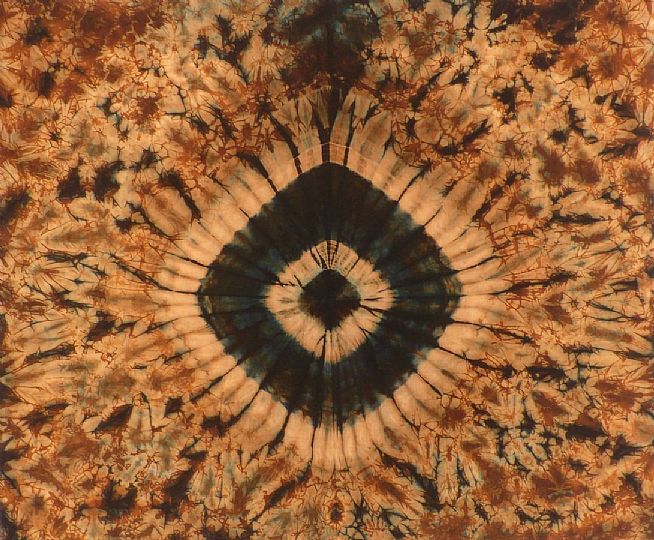 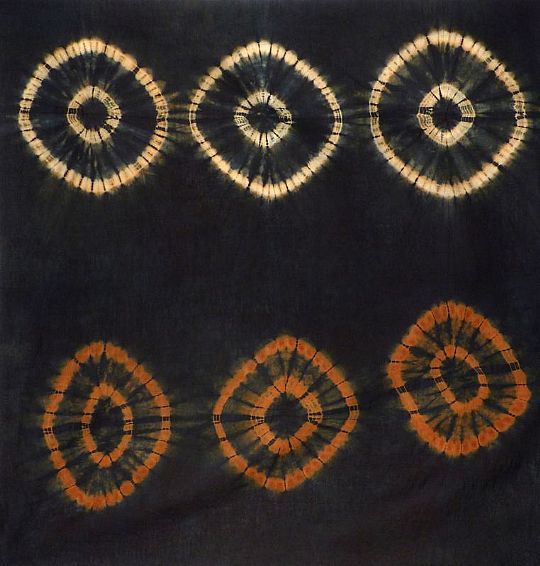 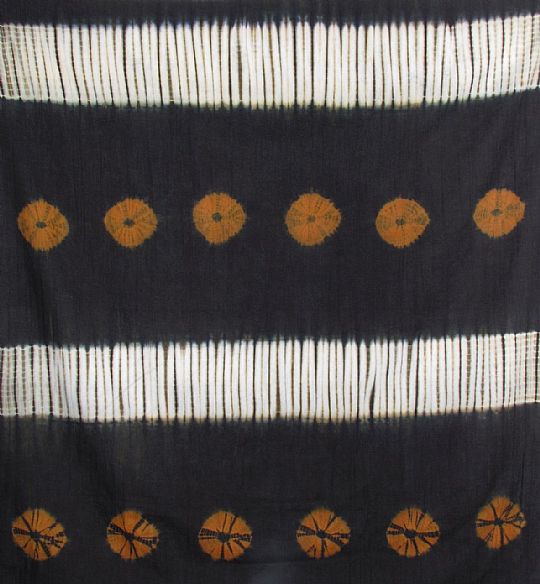 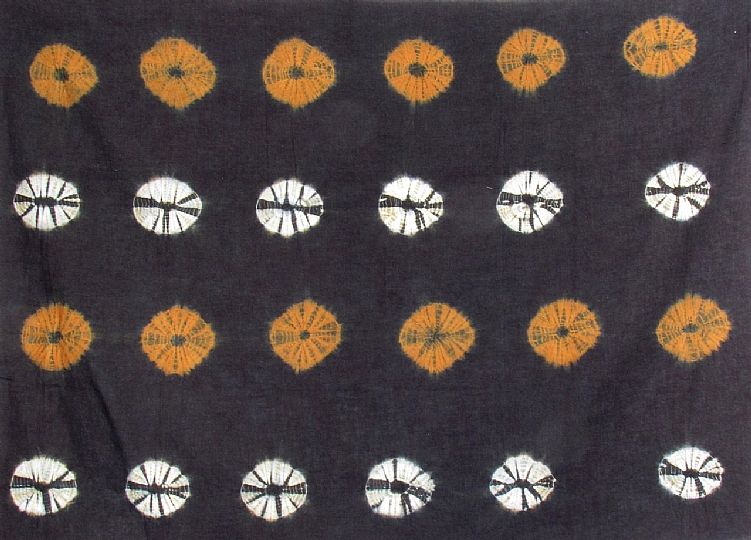 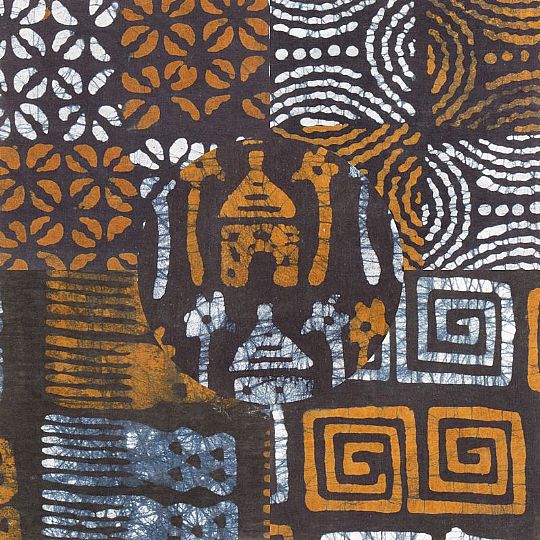 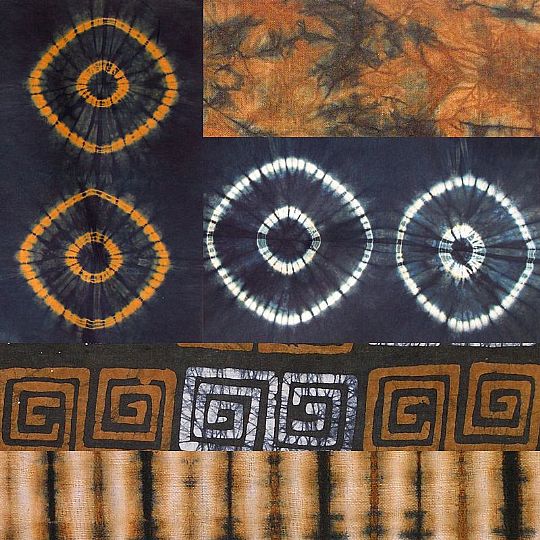